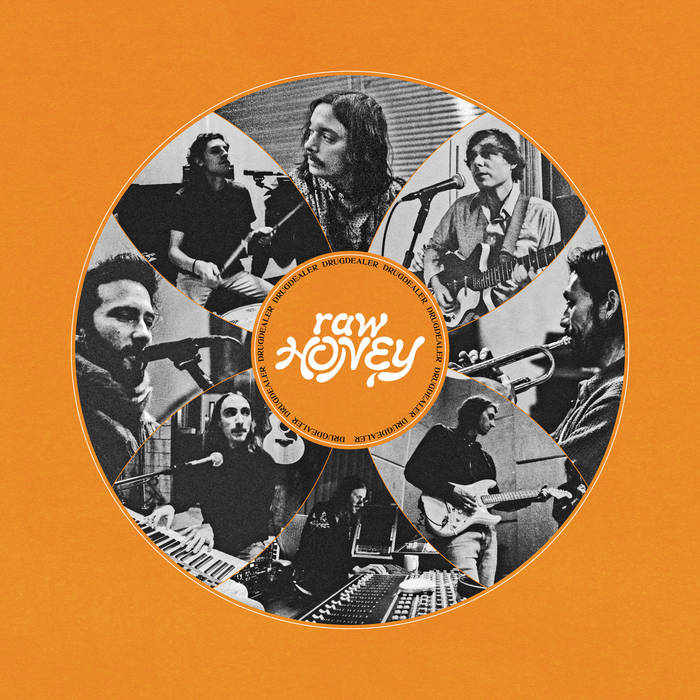 Josh Woods feels like another time and place, man. i hope so badly Drugdealer stays on this particular wavelength just a little longer. Favorite track: Fools.

impressivelad I wouldn't normally be attracted to this kind of music, but this really is some lovely, glistening summery pop. an absolute delight to listen to. Favorite track: Lonely.

DanYouFeelTheLove about to be the soundtrack for my summer! Favorite track: Lonely.

“All anyone wants to be is what they can.”

On Raw Honey, his second album as Drugdealer, Michael Collins colors these existential conundrums with lush arrangements, memetic melodies, and a vulnerable tunefulness that tries to make sense of self-doubt and connected loneliness in our shared simulacra.

Collins, who never played an instrument let alone received musical training in any formal capacity, began experimenting with sounds in 2009 after traversing the US on freight trains. After a few years crafting abstract sampledelia, he decided to forgo his experimental exercises in favor of teaching himself how to write a traditional song. In doing so, he made the decision to approach songwriting from the perspective of a listener, rather than a “musician.”

In 2013, Collins headed west and enmeshed himself in the Los Angeles underground scene. It was there and then that he began collaborating with players in the orbit of Ariel Pink, over time crafting what would become Drugdealer’s debut album, The End of Comedy, a collection of sunlit songs as indebted to Laurel Canyon psych pop as it is Bacharachian orchestration.

Throughout Raw Honey, Collins and crew display their influences as a new tapestry, one woven with the fibers from thousands of tapestries that have colored our collective listening histories. As evidenced throughout Raw Honey, Collins ear for penning numbers that would sound as at home on Classic Rock radio as they would at Zebulon in Los Angeles, where any of the contributors to Raw Honey might likely be found on any night of the week, on stage, or in the audience supporting another Angelino’s modern pop aspirations.

Rather than hiding behind a curtain or casually sidestepping AOR tropes, Raw Honey adheres to a modern kind of creation — one that cultivates influences and espouses reverence. An honest totem, Raw Honey isn’t tangled up in social norms, with Collins prefering to air his self-doubt as a northern star to guide like-minded people wherever they need to go.

Bandcamp Daily  your guide to the world of Bandcamp